Personally, we don’t think any girls getaway is complete without a boozy lunch. So, we couldn’t have asked for a better way to kick off our Northshore Getaway than with a private lunch at LOLA, one of Covington’s most delicious high end restaurants. Knowing that Lola was owned by a local chef couple who formerly worked at the original Brennan’s, we had high expectations. And boy were they surpassed! As soon as we walked into LOLA’s quaint dining room, we were swept off our feet. We fell in love with the eclectic decorations, made even more unique by the fact that LOLA’s kitchen is housed in the caboose of a train! Our only regret was the fact that our visit occurred prior to LOLA’s renovation of their second dining room, which will also be in a train car. Looks like we have to go back!

Of course we had to start our lunch by popping open some wine, and with LOLA’s extensive wine list, this wasn’t an easy decision. We finally decided on the Schramsberg Brut Rosé (because, honestly, we have never turned down a Rosé), before getting ready to get our fill of LOLA’s delicious contemporary cuisine. We started off by sharing a pimento cheese spread with a side of pickled veggies, which we couldn’t get enough of. While we’ve never met a pimento cheese we didn’t like, we have to say that LOLA’s version was nothing short of perfection. We also dug into the watermelon, beet, and goat cheese salad, which was drizzled with balsamic dressing. We knew it would be hard to top the pimento cheese, but this salad was one of the freshest we’ve ever had, and we can’t picture a more perfect salad for a summertime lunch. Before we knew it, it was time to move onto more salads and sandwiches, which certainly did not disappoint. With eighteen sandwich options and five different salads on Lola’s lunch menu, each of which sounded better than the one before, we had quite the difficult time choosing, so we ultimately decided to mix and match. Some of us settled on the New Hampshire sandwich, which was served with brie, ham, and apricot preserves on a buttery, toasted croissant, while others chose the Bostonian sandwich, which was served with turkey, bacon, provolone, avocado, and sun dried tomato aioli. For those of us who chose to forego the carbs, Lola’s salads could not have been more satisfying! After sampling LOLA’s Chinese Chopped Chicken Salad and the signature LOLA Salad, served with pecans and blue cheese, and which we chose to top with a helping of chicken salad, we almost forgot we were eating healthy. Between the delicious wine, the unbelievably fresh appetizers, and the delectable salads and sandwiches, we felt like we were in heaven. And our Lola experience wasn’t over yet. We still had the best part – dessert! LOLA’s well known signature dessert is its Hummingbird Cake, a mix between carrot cake and banana bread. But we found it hard to pick a favorite after also trying the Ooey Gooey Cake, which was to die for. Despite having been completely full after our giant portions of sandwiches and salads, we had no problem finishing the entire dessert spread! And, as if we needed one another reason to be even more in love, it turns out LOLA is the only restaurant in Covington that serves up Frosé! Since we consider ourselves to be expert Frosé tasters, we obviously couldn’t leave LOLA without grabbing a to go glass. And, in our expert opinion, we give it two thumbs up! The next time you are on the Northshore, make sure to stop by LOLA to try out their lunch menu, which is served from 10 – 12:30, Mondays – Fridays, or stop in for dinner on Thursdays – Saturdays from 5:00 – 9:30. We recommend making reservations in advance, as seating is limited. LOLA was the best welcome to Covington we could have ever asked for, and we left very full, a little bit tipsy, and knowing that we would certainly be returning to try out their dinner menu on our next trip! 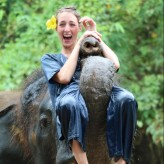 While originally from upstate New York, Sara came to NOLA for law school and got sucked in by this crazy city. Five years later she’s an official adopted New Orleanian. She’s an avid traveler, runner, and beignet lover (of course!) You can follow along with all of her travels and misadventures here.

Guide to Your Healthiest Week Ever

Late Night NOLA: The Best Things To Do in Town After 10PM

Guide to a Weekend in Palm Springs